London Monopoly Run with the Explorers 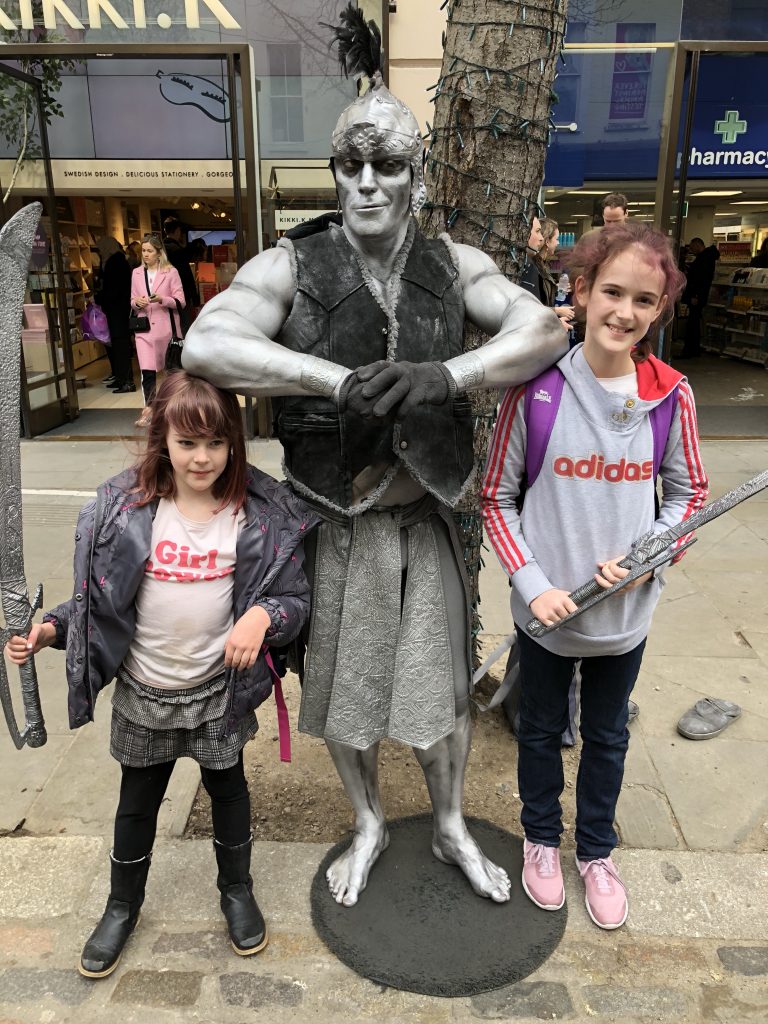 The London Monopoly run is an annual event that happens around London. Every participating group has a list of things to find throughout London and they have to do so as quickly as possible. You can learn all about it here.

Thomas was joining his explorers for the first time this year. They all met at the train station and headed to London together. We were taking the girls up for the day without any real plans just because London is a hard place for Autistic people and I wanted to ensure we were close by.

Tom left us at the train station and went onto a different part of the train to us with his explorer leaders and friends.

Off on a London Adventure!

We found seats for our first short journey from Warminster to Salisbury at which point we would need to change trains to continue our journey to London.

Once we had changed trains Emily got changed and we had some breakfast.

Once in London we left the station and headed to the underground where we took the tube to Westminster. While crossing over the road to get a few shots of Big Ben (who was having a facelift and was handless!)

Soon after we crossed over again and showed the girls Westminster Abby. Emily was less than impressed by this “old building” so we went to the statues. To begin with, she wasn’t too impressed but then she came to one she absolutely loved. It had brass plaques she could touch and feel.

They mesmerised her until she had touched them all and then she wanted to go see the man wearing a bedsheet ????????‍ (the Gandhi statue)

As a result, She thought he looked like he was a nice man and decided she liked this one as much as the last. In conclusion, Gandhi was a hit with Emily.

Afterwards, we then went for a walk to St James Park, taking the silver Jubilee walkway. When we got to the park we started to walk along and looked at the birds there. Stopping for a quick drink before leaving the park to head to the palace.

Incidentally, As we headed towards Buckingham Palace we spotted some mounted guards on the move. Both girls thoroughly enjoyed watching them pass on their horses.

By this point, Emily had found 2 flowers laid on the floor in different spots and was quite proud of her little bouquet.

Next, we then headed through Green Park back to the tube to this time head to Hamley’s Toy Store. Safe to say Emily thought she had died and gone to toy heaven.

So then after Spending an hour and a half in Hamley’s playing with different interactive games and toys. Emily picked herself a lovely Hamley’s teddy. As a rule, all of Emily’s teddies have to be named! So after much deliberation, she has named her Hamley’s bear Stuart. Alternately for the rest of the trip, her new bear Stuart joined Bob the bear. Apparently, they became best friends.

Before heading back to the tube to Covent gardens we stopped for some lunch. Ordinarily, we would have found a quiet place to eat but today we had lunch while watching a street performer. He was juggling on a rope, which was held up by 10 volunteers holding the rope! (5 either end).

Next, we made the mistake of not going in the lift up to the tube station. Instead, we found ourselves climbing the 193 steps (I think) back up to the top! Now the number of stairs wasn’t so much the issue. They were spiral, narrow and had people going up and down them. Those must be the worse 15 flights of stairs ever. I was sure Emily was going to be knocked down them several times. Also, my asthma did not like the exertion mixed with the number of bodies.

After a quick walk around the shops, the girls had their photo taken with this amazing chap. He was a performer and he adapted to Emily’s reluctance so well amazingly she surprised us by actually joining in.

We then headed on the tube back to South Kensington to head to the science museum.

I won’t lie it was a real disappointment. Mostly it is all now chargeable exhibits. The parts left of the free museum is what’s left of the same exhibits here the last time we went 4 years ago! There was only about 1/4 of the stuff from our last visit left. Everything else you had to pay for an allocated amount of time and the prices were very steep.

Now this charge had to be paid for each of the different displays! so to do them all would have cost us about the same to get into Legoland! Poor Jess was so looking forward to showing Emily around. It was Emily’s first time at the museums and she was looking forward to it. Despite this Emily had a fantastic time.

A little tired and deflated we perked them up with the promise of a McDonald’s at the station.

Station for the homeward trip.

Lastly, we had our McDonald’s before heading for drinks for the trip home from Tesco and then the platform.

Thomas wasn’t going to make it for the originally planned train they were running late. The explorers were still finishing off their monopoly run. As a result, we headed home exhausted from a fantastic day.

Thomas eventually made it home at 11:30 pm and went straight to bed buzzing from his amazing day.

For more Scouting Adventures from all three you can find these posts here.